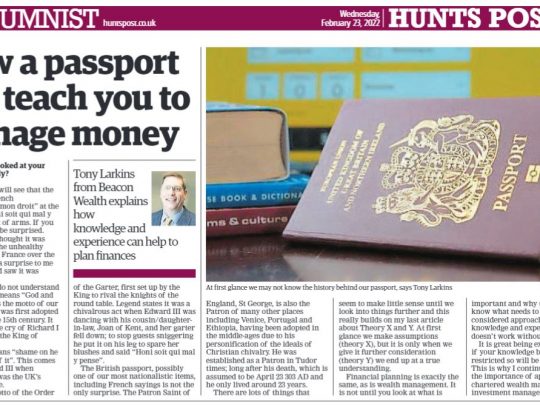 Have you ever looked at your passport properly?

If you have, you will see that the front has two French sayings:

“Dieu et mon droit” at the bottom, and “Honi soit qui mal y pense” at the coat of arms.

If you haven’t, you may be surprised.

Where does it originate from?

You may have thought it was Latin, but given the unhealthy relationship with France over the centuries. It was a surprise to me when I looked and saw it was French.

For those who do not understand the French language, the first means “God and my right”. This is the motto of our Monarchy, which was first adopted by Henry V in the 15th century. It was also the battle cry of Richard I against Phillip II the King of France in 1198.

The second means “shame on he who thinks evil of it”. This comes from King Edward III when Norman French was the UK’s common language. It is also the motto of the Order of the Garter. First set up by the King to rival the knights of the round table.

Legend states it was a chivalrous act when Edward III was dancing with his cousin/daughter-in-law, Joan of Kent, and her garter fell down. To stop guests sniggering he put it on his leg to spare her blushes and said “Honi soit qui mal y pense”.

The British passport, possibly one of our most nationalistic items, including French sayings is not the only surprise. The Patron Saint of England, St George, is also the Patron of many other places including Venice, Portugal and Ethiopia. This is due to him having been adopted in the middle-ages due to his personification of the ideals of Christian chivalry.  He was established as a Patron in Tudor times: long after his death, which is assumed to be 23rd April 303 AD. He only lived around 23 years.

Why is that important in Financial Planning?

There are lots of things that seem to make little sense until we look into things further and this really builds on my last article about Theory X and Y. At first glance we make assumptions (theory X), but it is only when we give it further consideration (theory Y) we end up at a true understanding.

Financial Planning is exactly the same, as is Wealth Management. It is not until you look at what is important and why that we really know what needs to be done, and a considered approach comes from knowledge and experience. One doesn’t work without the other.

It is great being experienced, but if your knowledge base is restricted so will be the experience. This is why I continually emphasise the importance of approaching a Chartered Wealth Manager for Investment Management.

At Beacon we are both experienced and chartered, find out more about how we can help you at https://beaconwm.co.uk/