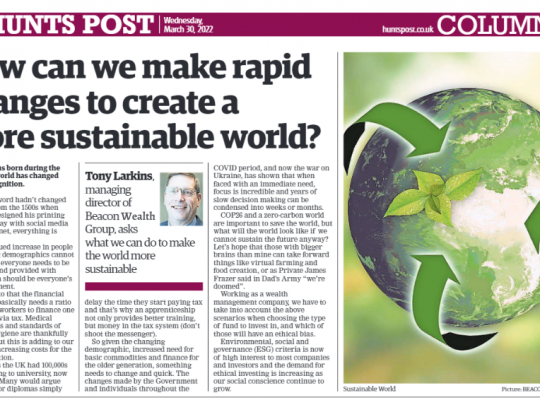 For those of us born during the sixties, the world has changed beyond recognition.

The printed word hadn’t changed that much from the 1500’s when Gutenburg designed his printing press, but today with social media and the internet, everything is instant.

Asia was regarded as small and the land of the cheap, but now it is highly advanced with a population of four times that of Europe. India is adding about one million people to the workforce a month and growth in many of the nations is growing fast.

The continued increase in people and changing demographics cannot be sustained, everyone needs to be fed, clothed and provided with energy, which should be everyone’s basic entitlement.

If you add to that the financial structure, it basically needs a ratio of about two workers to finance one older person via tax. The UK is now about 1:1.58 and Korea is as low as 1:0.9.

Medical improvements and standards of health and hygiene are thankfully improving, but this is adding to our problem of increasing costs for the aging population.

With an increasing average age, the power base is shifting to the older generation.

In the 1960’s the UK had 100,000’s of people going to university, now it’s millions. Many would argue that degrees or diplomas simply delay the time they start paying tax and that’s why an apprenticeship not only provides better training, but money in the tax system (don’t shoot the messenger).

So given the changing demographic, increased need for basic commodities and finance for the older generation, something needs to change and quick.

Do I have ideas? Yes of course I do, and I am sure you do as well.

The changes made by the Government and individuals throughout the COVID period, and now the war on Ukraine, has shown that when faced with an immediate need, focus is incredible and years of slow decision making can be condensed into weeks or months.

COP26 and a zero-carbon world are important to save the world, but what will the world look like if we cannot sustain the future anyway?

Let’s hope that those with bigger brains than mine can take forward things like virtual farming and food creation, or as Private James Frazer said in Dads Army “we’re doomed”.

Working as a wealth management company, we have to take into account the above scenario’s when choosing the type of fund to invest in, and which of those will have an Ethical bias.

Environmental, social and governance (ESG) criteria is now of high interest to most companies and investors and the demand for Ethical investing is increasing as our social conscious’ continue to grow.